skip to main | skip to sidebar

Bikes out of the Garage Lean

Took the bikes out of the garage this afternoon to show my friend Kialo. Each bike is unique and has a story or history. Not shown is my Univega touring bike because I was riding it when the photo was taken by Kialo. Just a cool photo in my opinion.

Dubois,WY...I have a good story about that place in regards to my Mexico - Canada tour in 1981.
A rangy cowboy with a broken nose and his buddy walk into a bar where a couple of stink'n cyclo tourists in funny pants are drinking beer. We start talking, swapping tales of adventure (the cowboy got his nose broke because his horse, a barely broke mustang, ran him under a low hanging tree branch). My cycling buddy, Bruce, a bit inebriated, bragged that he could ride anything because he ridden his bicycle from New Mexico by gawd!

After a few more rounds we go out back behind the bar where the horses are tied up and there's the semi-broke mustang! Bruce gets up on the saddle and the horse goes wild, bucking like a saddle bronc! The cinch strap breaks and off goes Bruce and the saddle ends up on the horse's belly. The cowboy with the broken nose fetches his horse while Bruce lays flat on the ground, the air knocked out him, staring up at the twilight sky. He eventually gets back up, the horse is tied back up, and we go back into the bar for a few more beers.

We close down the bar and another guy meet says we can camp in his backyard and gives me verbal directions. I finally get Bruce out of the bar, he is hurting and very drunk, and is wondering where we are and where was the rest of our crew. I informed him they left, they went to a campground up the road towards the Tetons, but I assured him we had a place to stay.

I actually found the guy's house at 2:00 AM and he answered the door. He was surprised, his wife was pissed, but he kept his word and let us sleep in his backyard. In the morning we used his bathroom, brushed our teeth and got on our bicycles, but as we were leaving, our host came out and offered us some frozen moose steaks. We took the steaks and headed up Togwatee Pass to catch the rest of our group.

We finally caught the rest of our crew at the Tetons (I have a great photo of Bruce climbing the pass). At the general store at the national park all we could find to eat was cream of mushroom soup...but we had the moose steaks. We ate pretty good that night.

Dubois was one of the best towns of the tour.
Posted by Mimbres Man at 11:10 PM 0 comments

Yuri's Night Silver City Orbit will commence on 04.12.2014 at 16:00 hours MDT. The launch point will be downtown in front of Gila Hike & Bike at 103 E. College St. Bring a bicycle and lock. The first orbit will be to the school named for local astronaut, lunar module pilot, lunar excursionist, geologist, and rover driver, Harrison Schmitt (Apollo 17, December 1972) where pics will be taken in front of the astronaut sign.
Other activities pending. 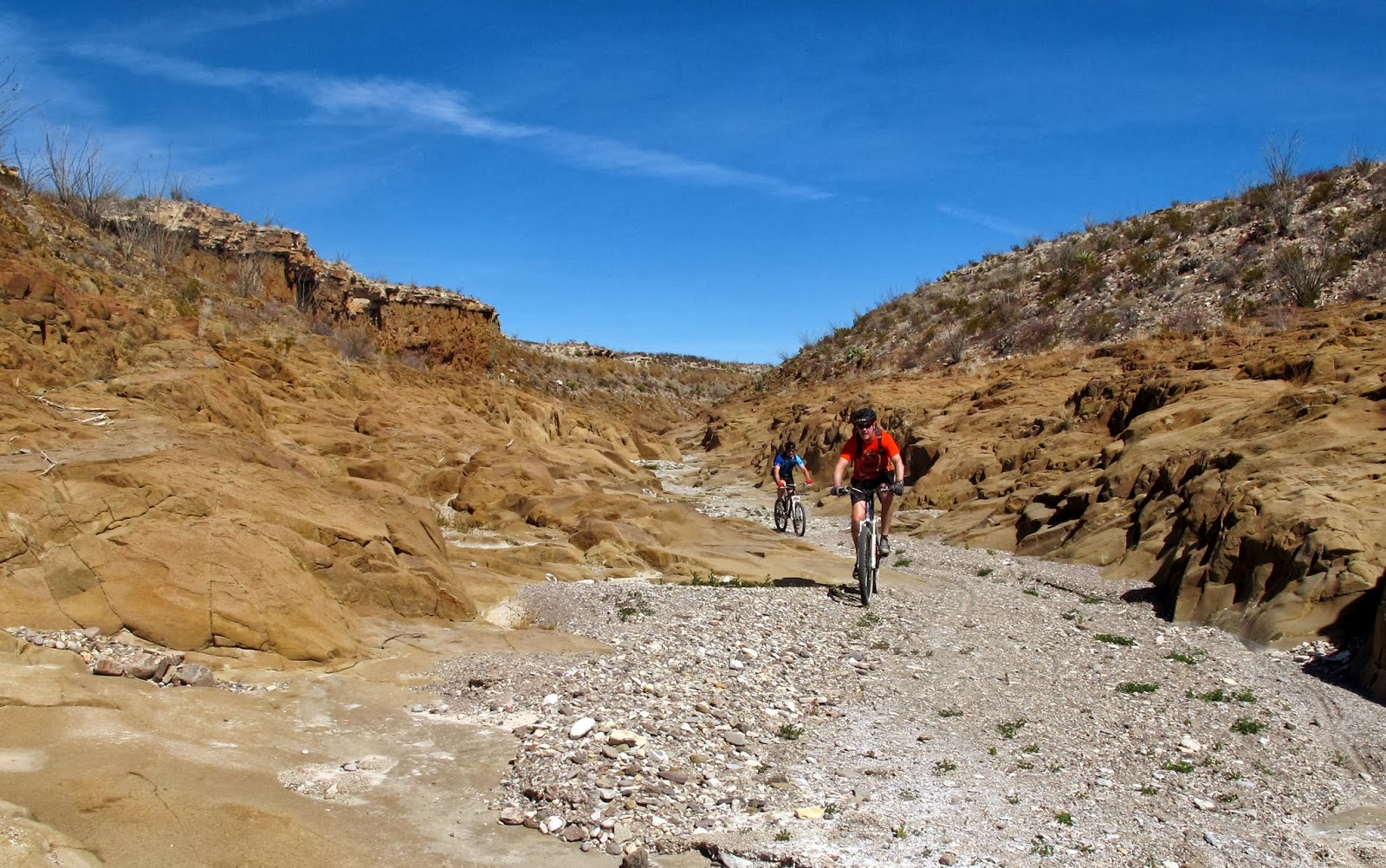 The other day, November 9th, I finally got to do the mass accent to Lordsburg. This is the one ride I was somewhat envious when reading about it from Venezuela.

We had a group of about 15 leave the parking lot on NM 90 about 25 miles south of Silver City. Our plan was to ride the Continental Divide National Scenic Trail to Lordsburg. I ended up using my back-up bike, my geared Litespeed leaning against the bumper of that Ford pickup because the rear valve on my Coconino started leaking as I was airing up the tire that morning. 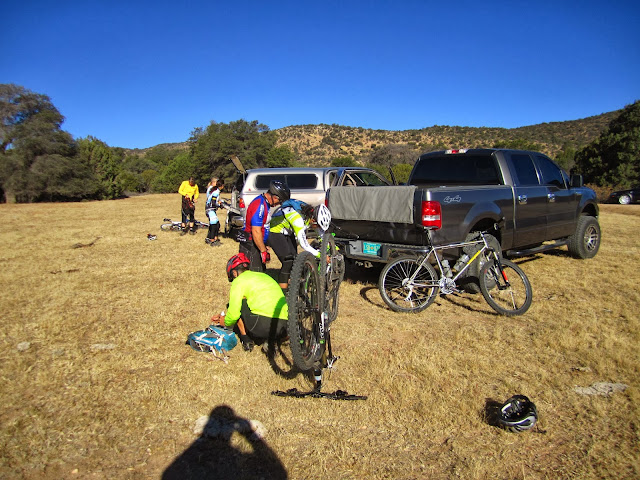 It turned out to be a beautiful day and ride, about 40 miles of dirt, the first half being single track and the other being 2 track dirt roads across the desert.

I really enjoyed the ride. I wasn't as fast as the 29" wheeled bikes, but I didn't care. I wasn't the last to reach Lordsburg, and it is all about the ride and enjoyment. This ride was well worth the wait! 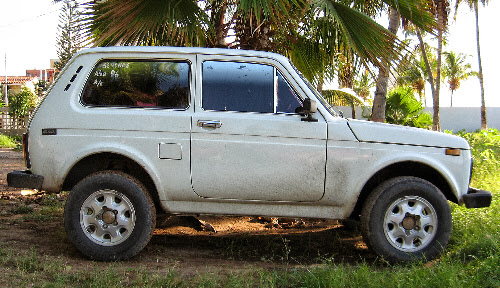 This was my Lada Niva. I had it from about 2004 to 2006. Picked it up in Caracas, and somehow it got us back to Puerto la Cruz without mishap. It was a small miracle after I learned about all the weird quirks of the vehicle as time went on. Cool car but it was always breaking down in one way or another. Never got to use it for its intended purpose, exploring offroad. The one time I tried, it broke down out in the boonies and had to get the help of a local to pull it up a hill with his truck so I could get it going down hill so I could eventually get it to run again. I think that was one of the last times I used it. A guy I worked with wanted it, I tried to warn him about it, but he bought it and flipped it for more money. Lesson learned.
Posted by Mimbres Man at 1:09 AM 0 comments

State of the Oceans

Since I am teaching Environmental Science, I am gathering and gleaning information like this. This is grim. If I was a high school teenager, I'd be bummed seeing this kind of report.
http://www.stateoftheocean.org/research.cfm 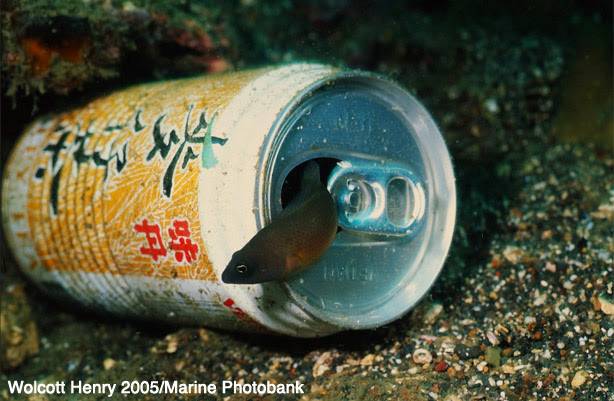 Mimbres Man
Anzoategui, Venezuela
New Mexico expat... Married to a wonderful woman! We are so different, but also the same. We love and enjoy each other very much!